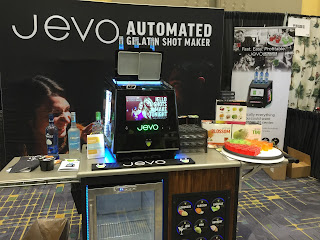 Bars and restaurants experience many “pain points” according to many beverage technology exhibitors at the NRA Show and the BAR Pavilion. A major pain point is speed of service – consumers want their cocktails and jello shots immediately. One possible solution to wait times is having consumers serve their own cocktails. DraftServ Technologies in partnership with Micro Matic and RIPE Bar Juice created a Cold Pressed Craft Margaritas Self-Serve Machine where a patron uses a DraftServ card (after age verification) to pour a cocktail. The Micro Matic machine holds a bag-in-box of cold-pressed HPP (high pressure processing) mixer and the spirit such as tequila and combines it for the patron. DraftServ also offers advanced consumer analytics by allowing owners and managers to review what pours best, at what time, and by demographic segments. 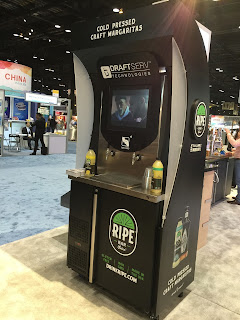 For high-volume bars serving jello shots, they have had to wait several hours for the gelatin shots to “set” in the refrigerator as well as messes created by mixing gelatin mix with liquor. The makers of Jevo The Automated Gelatin Shot Maker claim that bartenders can make up to 300 gelatin shots an hour by using the Ready-To-Eat mode that takes 15 minutes or the Quick Prep mode that takes 2.5 minutes before finishing in the refrigerator. Billed as the Keurig of gelatin shots, the Jevo is a machine that uses proprietary flavor pods and any liquor. The flavor pods are produced by Jel Sert, makers of Royal gelatin dessert mixes and Fla-Vor-Ice Freezer Pops. Jevo has partnered with alcoholic drinks producer Beam Suntory, makers of Pinnacle vodka, Cruzan rum, and Jim Beam Kentucky Fire. Jevo tracks usage of the flavor pods and can automatically place a replenishment order through Wi-Fi.

Another pain point for bars is watered down drinks as ice melts. It was previously thought that liquor could not be frozen. To maintain the taste of “on the rocks” drinks from first sip to last sip, Beyond Zero was developed to be able to freeze liquor into ice cubes. Patrons no longer have to worry about the dilution factor as frozen liquor melts into liquid liquor. 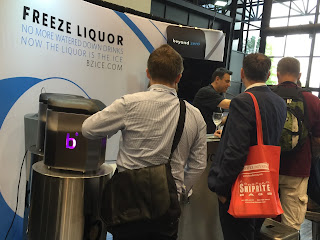 2. Kombucha and Tea as Cocktail Mixers 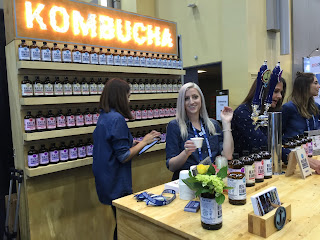 Kombucha and tea have traditionally been viewed as healthy beverages with antioxidants and less sugar than soda. But kombucha and tea have not been seen as cocktail mixers. Bartenders and drinkers are turning to a wider range of mixers as they go beyond tonic water to include bolder flavors such as ginger beer. In turn, makers of kombucha and tea see an opening in the cocktail space.

Health-Ade Kombucha, Pure Steeps (Wonder Drink), and Owl’s Brew exhibited at the BAR Pavilion to market themselves as cocktail mixers to bar and restaurant operators. At the NRA Show, Health-Ade Kombucha served kombucha on tap and from glass bottles. Health-Ade offered four cocktails recipes including for PCH Mojito and Beet Sangria. Stephen Lee, CEO of Pure Steeps sampled his Kombucha Wonder Drinks. He explained how kombucha makes a good mixer in cocktails. He offers several kombucha cocktail recipes including one for the Blood Orange Kombucharita in his book, Kombucha Revolution: 75 Recipes for Homemade Brews, Fixers, Elixirs, and Mixers. 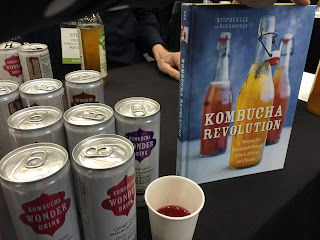 Owl’s Brew offered its “Tea Crafted for Cocktails”. The company’s liquid tea concentrates are loose leaf teas and spices that have been fresh-brewed and sweetened before bottling. The Owl’s Brew products designed to be two parts Owl’s Brew and one part liquor were designed to provide a fresh, lightly sweetened alternative to existing mixers. 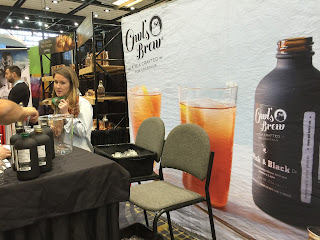