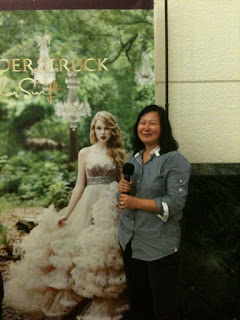 Macy's held a huge launch event for Taylor Swift's first fragrance - Wonderstruck at its New York City Herald Square store. Taylor made a live appearance at Herald Square while Macy's live broadcast parts of the event to other stores across the country.

Macy's State Street in Chicago was one of the stores to get a live feed. The store offered karaoke of Taylor's songs. I held the mike for the phone but did not sing. I have done karaoke publicly only once in my life. Macy's also offered free makeovers from Elizabeth Arden (creator of the fragrance) and feather application on hair for those who made a purchase.
Posted by Virginia Lee at 5:52 AM