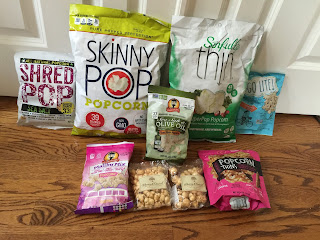 Popcorn products were in abundance at the Sweets & Snacks Expo which took place May 23-25 at Chicago’s McCormick Place. The trade show organized by the National Confectioners Association hosted over 800 exhibitors representing candy, chocolate, and snacks companies. I will talk about how popcorn makers are targeting both health and indulgence seekers in this article. Other articles will highlight the following trends in snacking that I saw at the show – coffee meets chocolate, chickpeas and lentils in the snack aisle; spicy flavors; and meat snacks offer breakfast, gourmet, and kosher options.

Popcorn’s neutral taste and low calorie content provides a versatile platform that allows companies to offer one of the lowest calorie snacking options (on a per cup basis) or the indulgence of caramel, cheese, and chocolate mixed in. In turn, popcorn along with meat snacks has been one of the fastest growers in the U.S. snack industry. The RTE (ready-to-eat) popcorn category grew by 10.9% to reach $1.3 billion for the 52 weeks ending April 16, 2017 according to IRI POS, MULO and C & MULO data cited in Amplify Snack Brands, Inc’s June 13, 2017 presentation. A large portion of the double-digit growth has been driven by the company’s SkinnyPop brand, the number two brand in RTE popcorn after PepsiCo’s Smartfood brand.

SkinnyPop and other better for you (BFY) popcorn brands have leveraged growing interest in healthier snacking. The SkinnyPop brand has grown sales by highlighting features such as 39 calories per cup (in the Original Popped Popcorn), Non-GMO Project certification, gluten free certification as well only using only three ingredients (popcorn, sunflower oil, and salt). Going beyond its Original RTE popcorn, the company introduced microwaveable popcorn and popcorn cakes in February and is rolling out RTE popcorn in Real Cheese Aged White Cheddar & Pepper Jack varieties (47 calories per cup) this month. 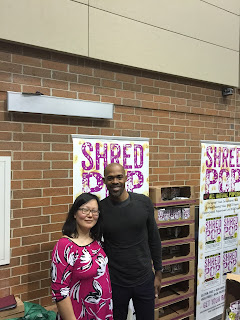 A number of other companies also highlighted the low number of calories for their RTE popcorn at the show. SHRED Brands LLC highlighted “SHRED Snack approved at 33 calories/cup” on its SHRED Pop package. SHRED Pop is targeted towards calorie-counters and fans of Dr. Ian K. Smith, best-selling author and creator of the SHRED diet. I had a chance to meet Dr. Smith at SHRED Brands' booth at the Good Food Festival held in Chicago in March 2017.

Gaslamp Popcorn Co notes that its Sea Salt & Olive Oil Hand Made Popcorn contains 37 calories per cup. This popcorn is targeted at foodies with a small batch, kettle-popped process and the use of California Olive Ranch Extra Virgin Olive Oil. Open Road Snacks notes 43 calories per cup and 18g whole grain for its Sinfully Thin SuperPop Popcorn Herb & Spice Popcorn with Kale & Pomegranate. By using dehydrated kale flakes and pomegranate powder, the company seeks to position its popcorn as not just BFY but as a superfood. Karen Bradley, VP of National Sales at Open Road Snacks, told me that her company targets a wide range of consumers by offering both BFY Sinfully Thin Popcorn range as well as indulgent Rocky Mountain Popcorn (with the "taste HUGE" slogan) in flavors like caramel, kettle, and white cheddar. Open Road Snacks was acquired by Fresca Foods Inc in February 2017. By using a 0.625oz bag instead of a 1oz bag, Herr Foods Inc is able to claim 80 calories per bag for its Go Lite! Himalayan Salt popcorn. In addition to using Himalayan salt that is popular among foodies, the company uses coconut oil, currently viewed as one of the healthiest cooking oils. 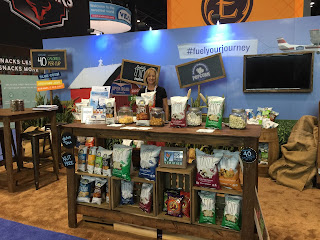 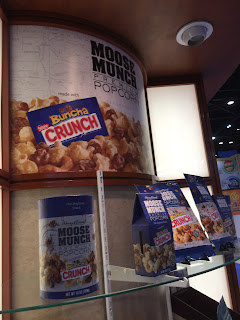 Also offering indulgence was Harry & David who introduced two new varieties of its Moose Munch Premium Popcorn featuring Nestlé’s confections - Moose Munch Popcorn made with Nestlé Butterfinger Bites and Moose Munch Popcorn made with Nestlé Buncha Crunch. I spoke with Harry & David’s President Steven Lightman and Midwest Gourmet Food Group’s President Steve Druckman at the 1-800-Flowers.com booth at the show. 1-800-Flowers.com acquired Harry & David in 2014 and also owns The Popcorn Factory, Cheryl’s Cookies, Wolferman’s, 1-800-baskets.com, Stockyards, and fruitbouquets.com). Moose Munch and The Popcorn Factory primarily sell their products directly to the consumer. Lightman talked about how the company is seeking to position Moose Munch as an everyday snacking item instead of holiday gifting only. Consumers are familiar with Moose Munch from its availability in department and home stores such as Macy’s and Bed, Bath & Beyond during the Christmas shopping season as well as on the Harry & David’s catalog and website. To reposition the Moose Munch brand and reach younger consumers, the company has decided to go after self-consumption and snacking occasions through new products such as the Nestlé collaboration, smaller package sizes, and an expansion of retail channels. Using smaller single-serve 4oz bags and share-size 8oz bags instead of tins and drums allows Harry & David to sell their premium items into convenience stores such as 7-Eleven which receive more foot traffic than department stores. 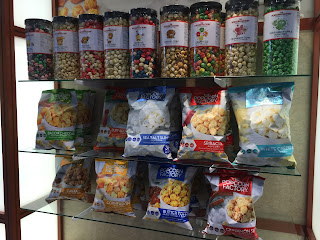 Similar to Lightman’s goal at Harry & David, Druckman wants to expand the number of eating and buying occasions for The Popcorn Factory’s popcorn. The Popcorn Factory is known as a source for decorated popcorn tins during the holidays through its website and catalog. Druckman seeks to expand its wholesale business and to increase the number of orders on The Popcorn Factory’s website. At the show, the company’s Wholesale Shared Bag Line offered multiple indulgent options including Bacon Cheddar Popcorn, Butter Toffee With Sea Salt Popcorn, and Cinnamon Sugar Popcorn in packages ranging from 3oz to 8oz. The Popcorn Factory also offered Single Flavor Clear Canisters of popcorn in a wide variety of flavors including Peanut Brittle and Sour Green Apple. In terms of e-commerce, Druckman wants to get more and more gifting occasions beyond birthdays, sympathy, thank you, and graduation. To aid this effort, parent company 1-800-Flowers.com offers the Celebrations Passport membership program similar to Amazon Prime where consumers receive free unlimited standard 2 business shipping with no minimum purchase across all of the company’s brands for an annual fee of $30. 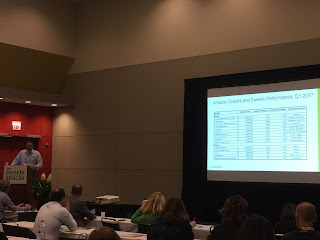 Candy and snack manufacturers are increasingly interested in using e-commerce to grow sales. At the show, One Click Retail’s VP of E-Commerce, Nathan Rigby, stressed the need to compete on Amazon.com effectively in his “State of the Market: E-Commerce for Candy and Snacks” presentation. Rigby stated that grocery sales on Amazon U.S. passed the $1 billion mark in 2016 and totaled $350 million in the first quarter of 2017, up 30% year-over-year.